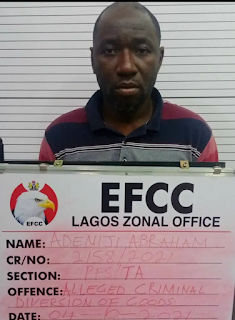 The Lagos Zonal Command of the Economic and Financial Crimes Commission  has arrested one Abraham Adeniji for allegedly obtaining goods under false pretense and diversion of funds to the tune of N82, 803,550.00.

He was arrested following a petition received by the Commission from one Gao Shu Quin, a Chinese national.

The petitioner alleged that she met the suspect sometime in 2017 while doing her legitimate business.

The suspect will soon be charged to court as soon as the investigation is completed, according to a statement by EFCC Spokesman, Wilson Uwujaren and made available to Vanguard on Monday night.

The founder of bet9ja Kunle Soname: Biography, Career & Other Stuffs