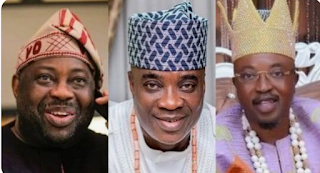 K1 De Ultimate was seen greeting and congratulating the Oba Rasheed and whining about not being invited to a recent event conducted by the monarch in a video released on Dele Momodu’s Instagram.

KWAM 1 chastised the monarch for failing to tell Dele Momodu to notify him about the ceremony.

Dele Momodu reacted to this by describing the video as a total open disrespect to the king and recounting what really happened between him and KWAM 1.

According to Momodu, KWAM 1 was invited to perform at the ceremony on October 2nd, 2021, for an agreed sum, but the singer never responded.

Dele Momodu went on to say that he invited Kwam1’s manager to breakfast and requested him to meet with the artist and check performance protocols, but that he never got a response.

Momodu, who was dissatisfied with Kwam1‘s actions in the video, described it as “very unfortunate” and “deserving of open condemnation.”

Getting Verified on TikTok Is Harder Than You Think