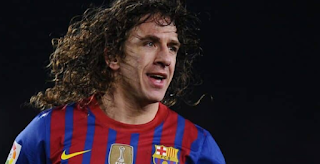 The former Spain international still keeps track of his club’s performance on the pitch, and he was impressed with the women’s team display on Wednesday night

Oshoala delivered a sterling performance as Barcelona began their Champions League defence with a comprehensive victory over the English side.

Puyol took to his Twitter account to praise the Super Falcons captain for her all-round display against her former employees.

Oshoala then responded to Puyol’s praises with a quoted tweet, which read: GRACIAS legend.

Mariona Caldentey put Barcelona ahead, but it came after Oshoala’s initial shot had been saved. The former Liverpool star then provided the assist for Alexia Putellas for Barcelona’s second before scoring the third with a well-composed finish.

Lieke Martins scored Barcelona’s fourth after Frida Maanum had pulled one back for Arsenal.

But the headline was all about Oshoala, who has finally found form this season. The Nigerian star has now scored eight goals in all competitions for Jonatan Giráldez’s side this season.

US approves $319 million for new Consulate General in Lagos